This is such an easy Chicken Tikka Masala recipe, and it's just like the ones you get from an Indian restaurant or takeaway!

This is such an easy Chicken Tikka Masala recipe, and it's just like the ones you get from an Indian restaurant or takeaway!

Undoubtedly, Chicken Tikka Masala is THE most popular Indian dish in the UK. Some 23 million portions of the nation's favourite dish are sold each year in Indian restaurants, and M&S sell around 15 tons a week!

But...it may not be a true Indian food, having likely been created in England!

Where it really came from doesn't matter too much as it's a firm favourite, with a mix of spice, but not too much, and a delicious sauce.

What spices go in Tikka Masala?

Chicken Tikka Masala is all about the combination of spices.

Together, they create a wonderful aroma and make the curry so tasty.

The spices you need to make Tikka Masala are:

If you prefer your curries spicier, then use hotter chilli powder instead. Don't just add in more of the mild as it will throw off the mix of the other spices.

If you keep the same proportions of Tikka Masala spices, you can always bulk make your powder. This way, you can have it ready-made in your store cupboard and will save yourself time in the future.

Why is Chicken Tikka Masala red?

Some people think that Indian restaurants and takeouts add some kind of food colouring to a Tikka Masala to give it a reddish-orange colour.

However, you don't need to do this (and they may not either).

The rich colour is all down to the variety of spices you use.

The main spices in the masala are turmeric, which has a golden yellow colour as well as the powered chilli and tomato which have a bright red colour.

How do you marinate chicken for Tikka Masala?

Once you've got all your Tikka Masala spices together, you need to start marinating your chicken. The longer you can marinate the chicken for the greater the flavour.

Using a yoghurt will allow the spices to cling to the chicken better.

You can leave the chicken marinating for as little as an hour in the fridge, but 24 hours will mean you get a lot more taste.

Do be sure to cover the dish you're marinating the chicken tikka masala in, as it has a powerful flavour and will make your fridge smell 🙂

Tikka and Tikka Masala start pretty much the same.

For both dishes, you need to put together the spices and marinate the chicken chunks.

However, it's what happens after this time that changes the two dishes.

For a Chicken Tikka, the chicken is then cooked (traditionally) in a Tandoor oven, but under the grill will work too.

For a Chicken Tikka Masala, the chicken is cooked in creamy (and delicious) masala sauce.

We used balti dishes like these ones from Amazon to serve our masala, which keeps the sauce separate from the rice.

As we have Indian food all the time, they are a perfect way to serve curry.

How do you make easy chicken tikka masala?

Chicken Tikka Masala is an easy recipe, but you do need to give yourself a bit of time. It's not about doing much, but just allowing all the spices to marinate and let the flavours to sink in.

You need to allow at least one hour, but it's best if you can prepare the chicken 24 hours in advance to get the most out of the spices.

After you've combined all the spices, mix them with the yoghurt and chicken, so everything is coated well.

When it's ready, you can cook the chicken and begin to prepare your sauce base.

After frying your onions, the spices get added, and the colour of the sauce starts coming together to make the classic Tikka Masala red-orange.

You then need to add the final ingredients and let the Tikka Masala simmer to cook the chicken through.

I love naan bread! So it's a staple side dish. Rice is perfect on the side, as is saag aloo and poppadums. 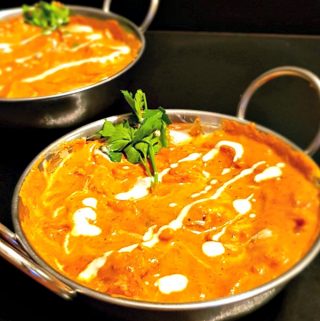 This is such an easy Chicken Tikka Masala recipe and it's just like the ones you get from an Indian restaurant or takeaway!
5 from 9 votes
Print Pin Rate
Course: Main Course
Cuisine: Indian
Prep Time: 10 minutes
Cook Time: 30 minutes
Plus marinating time +: 1 hour
Total Time: 40 minutes
Servings: 6
Calories: 416kcal
Author: Skint Chef